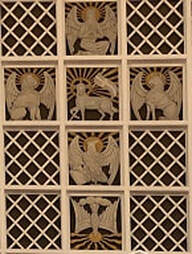 Fourteen major symbols are seen as one faces the Chancel screen. The six grouped symbols forming the cross represent the four evangelists around the central figure of the triumphant LAMB OF GOD carrying the cross-topped standard with the flying banner of victory

The top figure in this group represents MATTHEW, a winged creature with a human face.  MARK is the winged lion on the left, LUKE the winged ox on the right, and JOHN, the eagle holding the book, is below the LAMB.  At the base of the six figures is the DOVE, a symbol for the Holy Spirit. 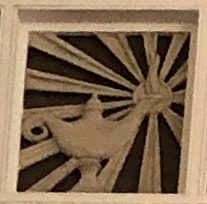 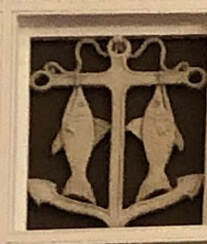 Below the lamp is an ANCHOR CROSS.  Of ancient Egyptian origin, it was used by the early
Christians in the catacombs to secretly mark the place where they met.  It is the symbol for
Christian steadfastness. 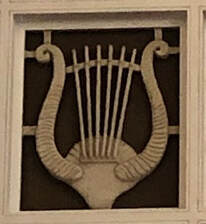 The lowest symbol on the left is the LYRE OR HARP.  The Psalmist (150:6) reminds us to
praise God "with flute and harp." 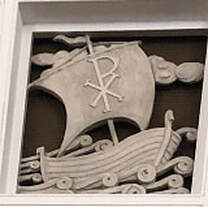 To the right of the lyre on the center panel of the screen is a SHIP WITH A CROSS AS A
MAST-HEAD.  This represents the travelers of the early church who took the gospel of
Christ to the world.  The word nave comes from the Latin word which meant the hold of the
ship which carries passengers.  This, the central area of the sanctuary is called the nave. 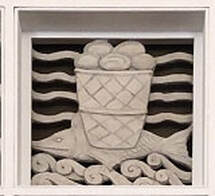 To the right of the ship, in the bottom row, is a BASKET OF LOAVES AND FISHES,
reminding us of the miracle when Jesus fed a large crowd of people on the shore of Lake
Galilee. 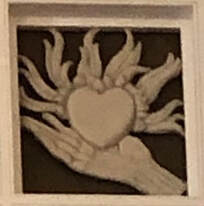 The top figure to the right of the central cross is a BURNING HEART that symbolizes
John Calvin, who said, "My heart is aflame for God." 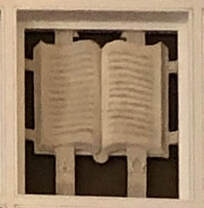 Just below the heart is an OPEN BOOK representing the law of God or the Ten
Commandments, with the Greek letters Alpha and Omega on the bookmarks.  "I am Alpha
and Omega, the beginning and the ending; saith the Lord."  (Revelation 1:8) 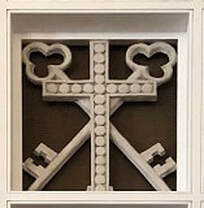 The last of the central screen figures on the right is that of a CROSS AND KEYS, which symbolizes
Peter.  When Jesus asked Peter, "Who do you say that I am?"  Peter replied, "You are the Christ, the Son
of  the living God."  Jesus answered, "You are Peter and on this rock (petra) I will build my church . . .
and  I  will give you the keys of the kingdom, and the gates of death shall not prevail against you ."
(Matthew 16:15-19) Tradition says that Peter was crucified head down, and his symbol is usually an
upside-down cross.  When Dr. Miller created this symbol with the upright cross of Christ, indicating that
the church was built on Peter's recognition of Jesus as the Christ and the foundation of the church, not on
the man Peter.